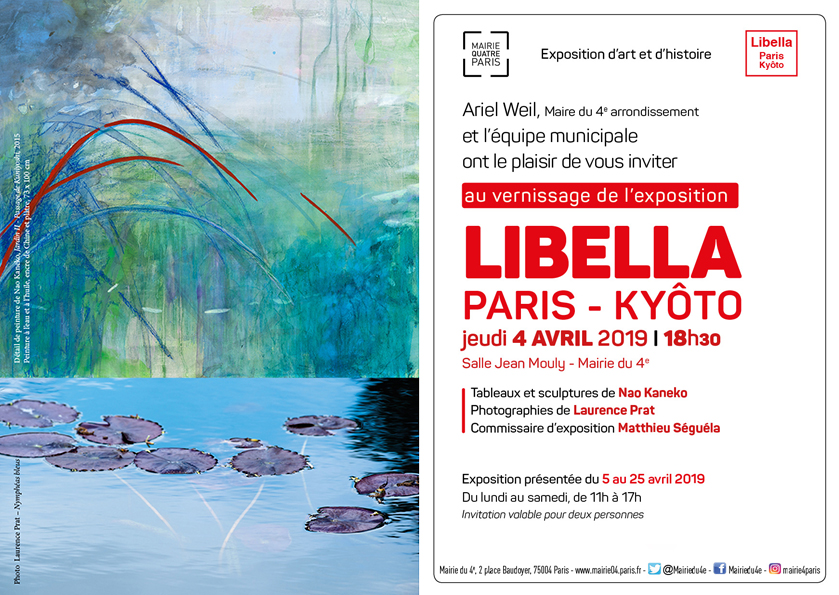 Libella, an exhibition of Art and of History, is a dialogue between French photographer Laurence Prat and Japanese painter Nao Kaneko, as imagined by curator and historian Matthieu Séguéla. It is resolutely anchored in Poetry.

In 1870’s Paris, writer, linguist and literary scholar Judith Gautier meets young autocrat Kinmochi Saionji, of Kyoto, who has come to study at the Sorbonne. After becoming friends, they translate Tankas (short, Japanese poems). These are published several years later as the communal work, “Les poèmes de la libellule”. The work, edited in Paris in 1885, is illustrated by the painter Hôsui Yamamoto. It has been recognized as one of the most beautiful realizations of “Japonism”, This literary and artistic collaboration was the developed from the meeting of a Parisian and a Kyotoite, and reflects the fertile dialogue between France and Japan, whose cultures continue to explore new forms of esthetic expression.

Today, paintings and sculptures of Nao Kaneko, as well as the photographs of Laurence Prat are inscribed in this dialogue. Their works are inspired by the beauty of this sublimated nature in the Poèmes de la libellule.

An aerial creature, the Dragonfly (la libellule) – akitsu or tombo in Japanese, libella from latin, means equilibrium. It speaks to nature’s ability to flourish even in an urban environment such as Paris.

Matthieu Séguéla, Curator of the exhibition.

To know more about Matthieu Séguéla 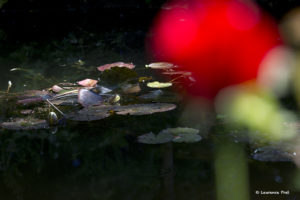 “On the pond’s surface…”, from these words taken from extracts of Judith Gauthier’s anthology, “Poèmes de la libellule”, my images propose an imaginary vision of a dragonfly in its natural environment, in this case Monet’s water-garden of Giverny…

These are photographs of perfume and light, embarkment towards water and vegetation by a quick flight, irregular and light.   The dragonfly’s world as a poetic metaphor.

If my photos are seen as a view towards a desired object, it is only partly visible, this pond and its environment.

…here scattered across this fresh soil, archives of a plant. I linger. Here and there, the brown skin of these bulbs, is ripped away, sometimes exposing a smooth pale yellow. All of its ‘potential’ is already there, though nothing allows me to predict its beauty. Which color is: le feu du roi?

The head gardener works… as I fly…

…Arriving in the Water Garden gives me the impression that it, the garden itself, is on holiday. Usually, so ready, so perfectly ready to be looked at, inhaled, spied on, tailored. Its belly turned towards the sun gliding across it until it reaches the edges of the evening’s brook. This stream of water which swells to receive the waterlilies as they ultimately dissolve in the meadow.

Yesterday, this space was at peace. I’m not sure how to think of it (or she, or he… one should think of it more as a she or rather as all, or perhaps emptiness, or nothingness… of this, too, I’m not sure…) Yesterday, then, it was abandoned… I immersed myself into the pond of Monet’s Water Garden. 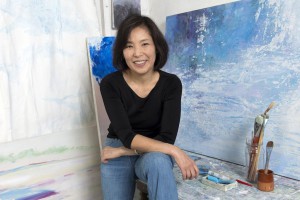 Nao Kaneko endeavours to draw from only the essential elements of landscapes, making reference to water, sky, moon and vegetation in her images.She finds herself in an imaginary voyage which transforms her creation into ‘semi-abstract’ works. She uses a traditional painting technique of preparing the canvas with plaster and rabbit-skin glue. Her explorations in new techniques are informed by experiences in sculpture. What appear as ‘imperfections’, give her artwork its unique expression.

Tokyo native, Nao Kaneko studied drawing and traditional weaving in Japan, then later in Finland, and France. In 1987, she received her degree in sculpture from the École Nationale des Beaux-Arts de Paris. Her work became more and more focused on painting. Since then, she has exhibited regularly in France, Japan, the United States, Korea, Italy, and Lebanon. In 2016, 2 exhibitions brought together many of her works. They were on show at the “Monet-Clemenceau Infinite Horizon paintings of Nao Kaneko Exhibition”, at the Normandy Impressionist Festival in Rouen, then at the Clemenceau Museum in Paris. In the summer of 2018, she had a large retrospective entitled “La Vague et L’âme” at the festival called “Japonismes 2018” focusing on the theme Franco-Japanese Exchanges at the Hotel Barons de Lacoste à Pézenas.[ps2id id=’seguela’ target= »/]

Matthieu Séguéla is a teacher and researcher at the French Institute of Research on Japan (CNRS-Ministère de l’Europe et des Affaires étrangères). He hold a doctorate in HIstory and is attached to the l’Institute of Political Studies, Paris. Author of the book – Clemenceau or the Temptation of Japan, (Cnrs Éditions, Prix Pavie) – and co-director of works on art and history. He has been responsible since 2014 for curating the exhibitions: Clemenceau,the Tiger and Asia at the National Museum of Asian Arts – Guimet (Paris), and at the Museum of Asian (Nice). In 2016 : Monet-Clemenceau, Infinite Horizon, Paintings of Nao Kaneko at Normandy Impressionism Festival (Rouen). under the framework of   Japonism 2018 : “Soulages”, Museum of Quai Branly-Jacques Chirac, (Paris) ; the Wave and the Soul – Paintings of Nao Kaneko (Pézenas) ; Clemenceau and the Japonese, Museum Clemenceau (Paris).[ps2id id=’kaneko’ target= »/]